The Zambezi River is subdivided into three “reaches”, the Upper, the Middle and the Lower.

Kabula is situated on the Upper Zambezi which is regarded as the best part of the river for Tiger fishing. The Tiger Fish breed in the thousands of pools in the Liuwa floodplains and are flushed out each year by the floods.

The best time for Tiger fishing at Kabula is from April to December when the water is warm and the level of the river is low before the start of the rainy season.

Large Tiger Fish are plentiful, as are various species of bream, particularly the predatory yellow-belly and thin face breams which make for great fishing and wonderful eating. Large barbel, which will also give you a fight to remember, are also present.

Fishing boats, which are provided with experienced boatmen who know the river, and the best Tiger fishing spots, are available for hire.

Fishing rods and tackle, if required, are provided free of charge with the boats.  A charge will be levied for lost repalas and any equipment which is lost or damaged.

Please note that private boats are strictly not permitted.

Except in the case of bream, where the catch is being kept for the pot, we encourage “catch and release” especially with the Tiger Fish.

Please also note that fly-fishing for bream and Tiger Fish is becoming increasingly popular. To catch a large Tiger Fish on a light fly-rod is an unforgettable experience.

It should also be noted that since the promulgation of the Kavango-Zambezi Transfrontier Conservation Area (TFCA), and the relocation of villages away from the river and the creation of game corridors along the river banks, the number of large fish being caught has increased quite significantly. 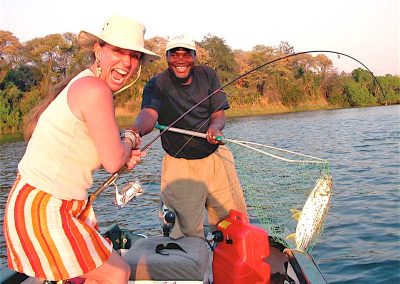